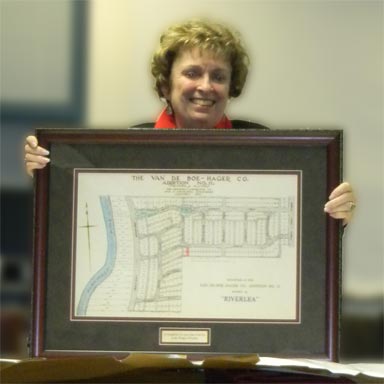 MARY JO CUSACK AND THE FRAMED PLAT OF RIVERLEA SHE RECEIVED AS A THANK YOU FROM THE RIVERLEA VILLAGE COUNCIL MEMBERS.

A RESOLUTION OF APPRECIATION TO MARY JO CUSACK FOR HER SERVICE TO THE RESIDENTS OF THE VILLAGE OF RIVERLEA, OHIO

WHEREAS, Mary Jo Cusack will soon complete twenty-two continuous years of elected service to the residents of the Village of Riverlea, Ohio, including the last eight years as Mayor; and

WHEREAS, Mary Jo Cusack has sought to address difficult issues facing the Village, and in so doing has provided attentive leadership to promote the common wealth; and

WHEREAS, in these and other efforts, Mary Jo Cusack has provided considered, thoughtful and measured leadership, counsel and commentary to the Council, to other Village officials, and to the citizenry, all with a remarkable spirit of collegiality, and has thereby exemplified the ideal of public service.

NOW, THEREFORE, BE IT RESOLVED BY THE COUNCIL OF THE VILLAGE OF RIVERLEA, OHIO, THAT:

Section 2. This Resolution shall be in full force and effect from and after the earliest date permitted by law. Pursuant to Section 731.25, Ohio Revised Code, the Council of the Village of Riverlea hereby determines that publication of this Resolution in a newspaper is unnecessary and does hereby determine that this Resolution shall be published by posting copies hereof in the five places which are determined to be the five most public places in the Village of Riverlea, Ohio.

AND being seconded by Messrs. Ankrom, Gordon, Griffin, Hamor, and MacGilvray, and the requirement to read the same on three separate days having been waived, said Resolution was duly ADOPTED this 19th day of December, 2011.

I hereby certify that on the 21st_ day of December 2011, I posted a copy of the above Ordinance in each of the five places heretofore designated by Council as the most public places in the Village of Riverlea and that the same remained there posted continuously for fifteen (15) days.

2010 State of the Village Report

December 27th, 2017
Annexation: Where we are and where we go from here

Annexation: Where we are and where we go from here